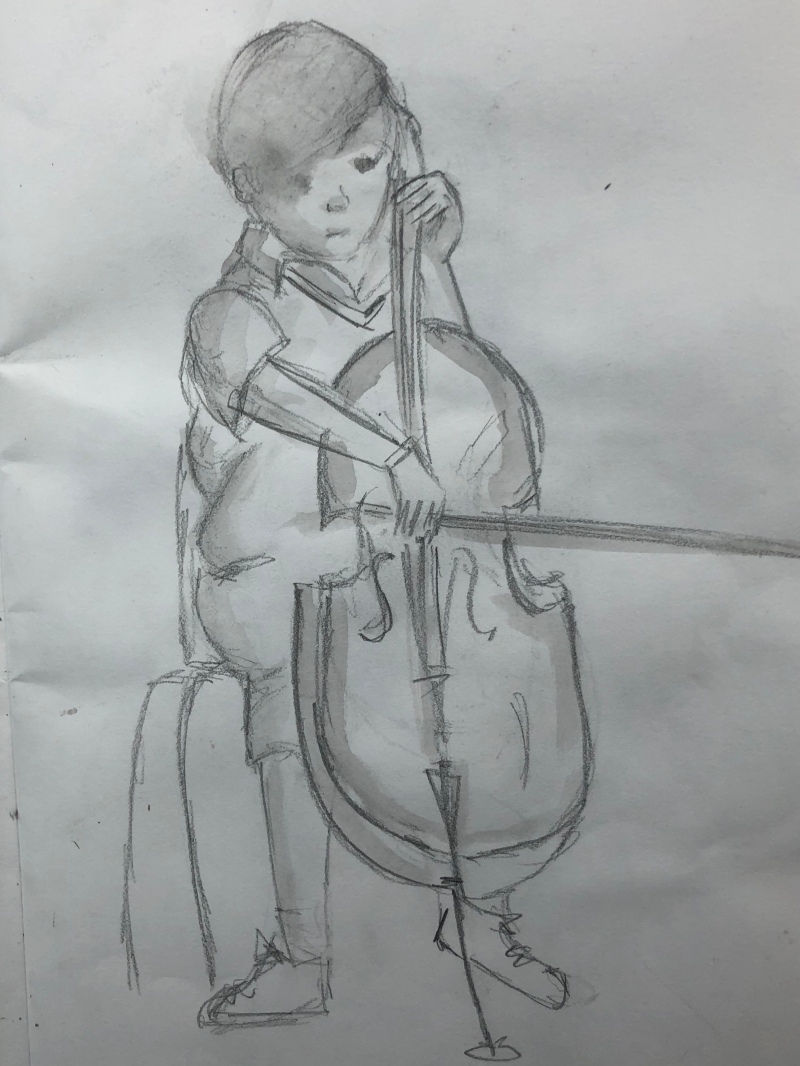 A drawing from my sketchbook

On Wednesday an illustrator came in to talk about his sketch books. Sketching is something that we have to do a lot of and which I don’t do enough of. I am more inclined to write than to draw.

He put the contents of his sketchbooks on the projector in the lecture theatre and talked for 20 minutes about them. He kept saying ‘back in the day’ and ‘I won’t say when it was exactly that I was at St Martin’s’ and being concerned about how long ago it was that he was himself a student that it made me wonder if he was worried about dying. One sketch made it to The Times billboards across London. At first he was coy about how much money he made from that because he said that talking about money was uncouth but we soon learnt that it was £60k because he told us.

After he spoke there was a question and answer session. It was like watching that tv show ‘Grumpy Old Men’ live, a panel of the course’s evidently bitter and resentful tutors bemoaning art school and students ‘these days’. One in particular stopped the whole debate to say, with the assumed gravitas of the new messiah:

“I’m looking around me now and I can see at least 15 of you on your phones. This is the problem. You’ve all got such short attention spans. You can’t even engage in a talk that lasts 20 minutes.”

The two girls next to me who had been included in this tirade had in fact been using their phones to take notes on the lecture.

He then continued on a tangent and had gone quite far down the road with prattle – beginning a phrase with ‘what I want to know is’ but ending it having somehow found a way to answer his own nonsense – that he didn’t know how to claw back and had become humiliated and anxious in the hole he had dug.

The bearded tutor from last week’s walk around added this: “In the real world you won’t have all the fantastic resources that you have here (at Camberwell). No, you’ll have to pay for the them.” The row of international students in front of me – paying double the amount the UK students are slapping down for this course – shifted uncomfortably in their seats.

It was only when the bearded one – aroused by his own rhetoric – said that only a handful of us would actually make it as illustrators that I decided to get up and walk out. On my way out of the building I was pursued by a couple of Chinese students who had followed suit. One of them said to me that she had never felt so insulted. That perhaps if they hadn’t had such dull subject matter (the contents of someone else’s sketchbooks) then they wouldn’t need to seek something more entertaining on their phones and finally that that was an hour of her life she’d never get back.

Of course, the bearded man was right; only a handful of us will make it. I’m old enough to know that. I’m also old enough not to have to be told.